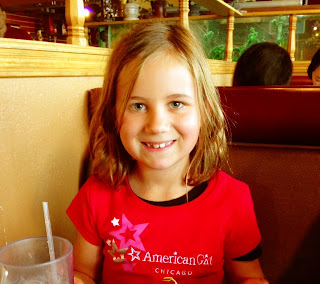 I'm a little bit behind here.  It's December 14 and we are racing to ramp up with the Tenley Project™ in 2013 we have in previous years.

Last year we donated 55 American Girl dolls and a matching $5,000 donation to the Children's Hospital in Denver, which is amazing.

But let me back up a little bit.

In 2010 we started this whole thing off with a holiday lesson for my 5-year-old daughter -- you can read the original story here.

Just after Thanksgiving, Seth Godin posted about charitable giving (you can read the whole post if you would like) and here's a quote from it:


Why on earth would a rational person give money to charity--particularly a charity that supports strangers? What do they get?

In fact, every time someone donates to a good cause, they're buying a story, a story that's worth more than the amount they donated.

The success of the Tenley Project™ has been attributed largely to the transparency that we've shared with Tenley's story and the transparency of Tenley herself in telling people about her project.  We get accused, a lot, about turning this project into something more commercial than the original message, but I can personally assure that nothing could be further from the truth.  As with anything that grows beyond the original vision, some amount of structure has to be put in-place in order to ensure that the goal is achieved.

We have been lucky enough, over the past several years, to have the assistance of both friends and family in delivering all of the gifts to the hospital on Christmas day.  For the past several years, my parents have been in Colorado and been able to assist Tenley in delivering her gifts.  This project has been especially impactful on my mom who, as I was growing up, worked in a restaurant in California that donated its proceeds to Children's Hospital at Stanford and still works today with charitable organizations that fund the Children's Hospital at Stanford; for her, this is simply her granddaughter carrying on a tradition that has always been near to her heart.

As this project has progressed, we still take the time to reinforce with Tenley the original reason why she started this project, which go back to those original 3 reasons by Anthony Robbins:

Tenley now spends her time during throughout the year saving up money to simply give away to her project -- I'm proud to say that she has learned these lessons well at a pretty young age and I hope that she embraces these lessons for the rest of her life.

Our promise remains the same as it has in past years: if you donate money to the Tenley Project™, 100% of the money goes directly to support it.  That means that we pay the tax effect, we ensure that everything gets delivered, etc. -- absolutely no part of the money donated is used for anything other than directly benefiting Children's Hospital.  As with the past couple of years, we again have a donor that will match donations up to $5,000.00, so every dollar donated actually provides the hospital with a cash donation of an additional dollar.

I am beyond proud of the fact that people that have donated in previous years have been querying us about the project -- some folks have even already donated for 2013 and we just received a doll in the mail the other day for Tenley to donate.  It seems as though Tenley's project has become part of a holiday tradition for people around the country, even when the support for on our side it is a little slow out of the gate, and I am overwhelmed by the generosity of people that we haven't even met.

We know that the economy is still tough this year and that you might not be in the position to be able to donate anything, but we would ask that you do us the favor of sharing the Tenley Project™ on Twitter, Facebook, and any other social media services -- the power of this project has and remains word-of-mouth on social media.

PS -- there are tons of charities out there with amazing stories that inspire the spirit of giving.  I hope that if you are able (or even if it seems really hard for you to do so), that you show some generosity towards the charity of your choice.  As with previous years, this is not some additional pitch to help out my daughter, rather it is an acknowledgement by me that participating in my daughter's project has greatly changed my outlook on giving and regardless of the charity you choose, I hope that you will experience the same results.
Posted by Ross at 5:54 PM No comments:
Email ThisBlogThis!Share to TwitterShare to FacebookShare to Pinterest
Newer Posts Older Posts Home
Subscribe to: Posts (Atom)