Here's what my iPod should do

I was thinking this morning as I was pulling into my office parking lot that the iPod I was listening to in my car should some how be able to automagically tell my computer exactly what song I was listening to, exactly where I stopped in that song, and start playing that song when I walked in the door.   Is that realistic?

Let me answer that in a few ways:

Are there potential problems with this?  Sure, especially if the computer it's trying to notify doesn't have the music on it, but that's a pretty simple test.  In thinking more about it, my guess would be that it would probably be easiest to implement this in an iPhone if someone could figure out how to have the iPhone auto-trigger an e-mail that then triggered an automator response once received by the machine.  That's kind of kludgy though, and it would be much cooler if iTunes was the black box for this process.

Posted by Ross at 8:31 AM No comments:
Email ThisBlogThis!Share to TwitterShare to FacebookShare to Pinterest

Add browser shortcuts to your applications on your BlackBerry 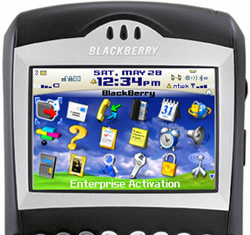 Yup, pretty much just like the iPhone, but a little bit more complex.

Here's the meat of the e-mail I got from United:

As of February 4, 2008, United has a new checked baggage
policy. Non-elite Mileage Plus® members and non-members
traveling on non-refundable Economy tickets within the
United States, Canada and U.S. territories, may check one
bag for free and a second for a $25 fee. The new policy
applies to tickets purchased beginning February 4, 2008 for
travel on or after May 5, 2008.

Wow!  I haven't gotten this notice from any other airlines -- is this becoming a new standard or is United hoping to lead the way on this one?  I guess you can look at this is an extra benefit to being a premium member, but most will probably look at it as another reason not to fly United.  I would be surprised to see Frontier, Jet Blue, or Southwest implement this policy.