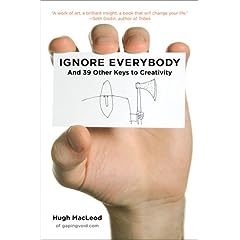 I've been following the growth of Hugh MacLeod through his blog, gaping void. I've always known Hugh as a guy that produces insightful blog posts and the guy that draws cartoons on the back of business cards. Hugh's drawings are cool and provocative and cause conversations; I have a number of them printed out in larger size and posted in my office to start conversations.
Hugh took a blog post that he wrote entitled "How to be Creative" (also available as a ChangeThis Manifesto), expanded upon it, and turned it into a book. In effect, I had already read a good portion of his book. I was aware Hugh was writing a book because I read his blog and he posted all about it and I follow him on twitter and he's been tweeting about it.

Ignore Everybody is exactly what I expected (hoped) that it would be: unflitered, unpolished, full of cool cartoons, and totally worth reading. I actually downloaded it to my Kindle right before my flight yesterday and read it during the flight with some time to spare (so, yes, it's a quick read).

In reading the book it's clear that Hugh did not compromise much to his editors at the publisher; he made the book the way he wanted it. I like books and blogs and articles that I imagine sound like the author talks and Ignore Everybody strikes me as exactly that kind of book; I could imagine having conversations on the topics in the book with Hugh and the language coming out exactly the same.

This book is not about marketing (though it will give you ideas). This book is not about becoming an artist (though it may inspire you to move along that trajectory). This book is not a tactical manual (it's most definitely not an ordered, step-by-step process). This book is about thinking big and embracing ideas (especially the scary ones) and changing your mindset. And it's about The Sex and Cash Theory, which explains that there are 2 kinds of jobs: the sexy, creative one and the one that pays the bills -- read the book for further definition and why this is dramatically important as you evaluate your current mindset.

This book will push you, hard, outside your envelope in a good way -- I hope that you are like me and you're willing to let it.

PS -- this is one of the better graphic-intensive business books to read on the Kindle. Probably due to the fact that all of the graphics are business card-size, which makes them just a little smaller than the width of the screen on a Kindle 2.
Posted by Ross at 3:48 PM No comments:
Email ThisBlogThis!Share to TwitterShare to FacebookShare to Pinterest

A knife sharpener that works for under $10 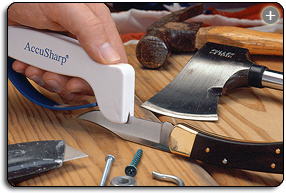 I decided to try out the AccuSharp knife sharpener based on the reviews on Amazon. To be honest: it looked to me like it should have had an "As Seen on TV" stamp on it, but for less than $10, I figured it was worth a try. Note that I did not read anything about it except for the glowing reviews.

When I received it, I was even more convinced that it should have been sold as a package with the food dehydrator (yeah, you know what I'm talking about). However, I figured that something that appeared to be so gimmicky couldn't have gotten the reviews it did for no reason, so I gave it a hard look:
To try it out, I used it on one of my pocket knives that was less than sharp -- within 25 strokes it had a razor edge, which is pretty incredible. Due to the fact that the knife I tried has serrations, I tried it on that portion as well and the AccuSharp put a razor edge on those as well with no special effort.

Besides looking cheap, this is a great knife sharpener to have around (and what do you care what your sharpener looks like as long as it works?).

Link -- AccuSharp via Amazon
Posted by Ross at 3:25 PM No comments:
Email ThisBlogThis!Share to TwitterShare to FacebookShare to Pinterest

Google announced and released today a Google Apps Sync, which allows a Windows user with Outlook to seamlessly connect Outlook to Google Apps Premier Edition. Instead of needing to use 3rd party products, employees that use Google Apps can seamlessly sync e-mail, contacts, and calendar data to Google's servers instead of an Exchange server. This software, as I've mentioned, is currently only available for Premiere Edition users, but at a cost of $50 per user per year, it's a small price as compared to yearly costs per user for Exchange.

Has the Exchange server in the computer room just become an artifact for small and medium (and maybe large) businesses? 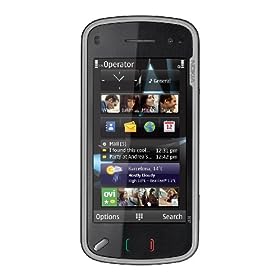 Link -- N97 on Amazon (for around $600 and available 6/25/09)
Link -- iPhone 3Gs on Apple's site
Posted by Ross at 9:25 AM 3 comments:
Email ThisBlogThis!Share to TwitterShare to FacebookShare to Pinterest

Did su.pr just win as the status update portal?

One of my challenges with posting certain content to certain services (Twitter, LinkedIn, etc.) was the kludgy way that I had to do it through a mish-mash of various services and through the use of an independent URL shortener. Even with doing all that, my content was only getting on to StumbleUpon is if someone stumbled it.

Su.pr changes the game by allowing me to post content directly to the StumbleUpon population and to choose whether or not to post the same content to Twitter and/or Facebook (no LinkedIn support yet). Furthermore, su.pr is a URL shortener natively, so I get that service without having to use a separate site. Additionally, su.pr allows me to schedule posts into the future, which means more flexibility around shorter posts and microblogs; now I can actually schedule some of that instead of having to think about it throughout the day.

What's really cool is the level of analytics that su.pr provides that shows optimal posting time, click-throughs, etc. for everything; similar to what Google Analytics does, but drilled down to the individual post.
Check it out -- su.pr
Posted by Ross at 12:34 PM No comments:
Email ThisBlogThis!Share to TwitterShare to FacebookShare to Pinterest

Wait, do you have a wired network in your home? Yes, everyone does: your electrical system.

Although technology to utilize existing powerlines to extend ethernet, phone lines, and crappy quality audio has been around for a while, a company called Averlogic is supposed to be providing a demo of the following 2 technologies:
While the security camera side is slightly less impressive, consider the implications for being able to stream high definition audio and video via an existing power plug in your home. The high definition signal coming out of the receiver can be brought into your television via HDMI or component; HDMI being cooler because you'll receive the audio and video via a single cable (assuming your tv or A/V receiver supports it). Additionally, the receivers include remote controls that allow you to manipulate the transmitter unit (i.e., change the channel, switch between DVD and cable, etc.). In thinking about how I consume video in my house, I rarely, if ever, have multiple televisions going at once and this would allow me to consolidate all of my A/V equipment in the same room as all my computer equipment instead of having multiple satellite TV receivers, multiple DVD players, etc. Furthermore, I would actually save money by reducing the total number of DirecTV receivers that I have and I would be able to access my DVR recordings from all of my tvs.

No word yet on pricing, but imagine how much you could save on recurring monthly fees and custom A/V installer fees.

Link -- press release
Posted by Ross at 9:06 AM No comments:
Email ThisBlogThis!Share to TwitterShare to FacebookShare to Pinterest

They said it couldn't be done.

They said I would never make it.

They said it wouldn't last.

Who are "they"? I look at statements like the ones above and wonder why those statements aren't worded like this:

They said that if anyone could do it, you were the one.

They said it would be hard, but I made it.

They said I could make it last if I wanted it badly enough.

The end result if we constantly find ourselves saying the former statements instead of the latter? Maybe some of us need to find a new "they."

(at least that's what they told me)

Picture from House of Sims

Thanks to Antony Bonavita for the unintentional inspiration
Posted by Ross at 3:30 PM 1 comment:
Email ThisBlogThis!Share to TwitterShare to FacebookShare to Pinterest
Newer Posts Older Posts Home
Subscribe to: Posts (Atom)