I've been a fan of Hugh McLeod for quite some time.  It was my pleasure to review his last book, Ignore Everybody on my own, so I was excited when his publisher asked if I would review a copy of his new book, Evil Plans: Having Fun on the Road to World Domination.  So with that having been said, here it comes:

FULL DISCLOSURE: I was provided a review copy of the book free of charge by the publisher.


Evil Plans is a relatively short book.  Don't mistake that for meaning it's not powerful and good, but it's short and concise, and I like that; I'm just saying that I was able to sit and read it in about 1.5 hours, which made it pretty easy to read it twice in the span of a single day. Additionally, it includes a good amount of Hugh's famous business card artwork, like the piece featured at the top of this post.  What I like about him including the artwork strategically throughout the chapters is that the artwork now evokes a different set of information in my brain when I look at it; yes, I do have some of the prints that appear in the book, so I guess I'm one of the contributors, in my small way, to Hugh's realization of his own Evil Plan.

The concept of having an Evil Plan seems simple: your Evil Plan is that thing/idea that actually gets you out there to start doing what you love.  Hugh goes through numerous examples and reinforcing ideas about the validity of Evil Plans and some tactics to get there while also asking some hard questions.  However, don't mistake this as a step-by-step, how-to book: like most books of this vein, the idea seems to be to get you thinking differently with you filling in the tactical gaps of getting to the end result.

There are some great concepts in the book: 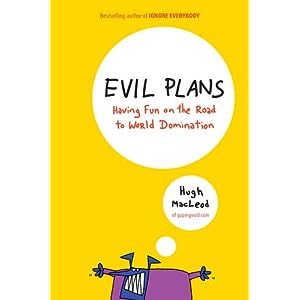 One of the more resonating chapters with me was the Death by Stuff chapter and it goes something like this: if you love your stuff and not what you do, then you'll suffer "Death by Stuff", which doesn't seem like a fun way to live.  When I was graduating college, I could have taken a high-paying consulting job and instead did something that I loved for half of the pay.  The high-paying job would have put me in a fancy apartment with an expensive car, and I would've been playing that game of upgrading and getting more stuff forever without loving what I was doing at all.  No regrets on my part when I look back.  I think I'm one of the few (only?) people in my senior class that actually didn't take the expected path.  And, yes, a bunch of them laughed at me.  But recently I've not heard from any of them that they're loving what they're doing.  Too bad for them, I guess.

I remember the "moment", as Hugh refers to it, of my first Evil Plan.  When I was a senior in college and right before I graduated, a guy that I had been working with doing event security told me not to get into the business and not to get into entertainment.  He then clarified the remark by saying that I shouldn't get into entertainment unless I could be at the top of an entertainment "pile".  Evil Plan decided and I spent the last 10 years actualizing it.  Worked hard, sacrificed weekends, nights, holidays, regular hours, normal jobs (see paragraph above), and higher pay (see paragraph above) to get there -- I slept rough and I was overextended and it was a blast.  Oh, and I still do that because I'm doing what I love, and, frankly, as Hugh rightly points out, there's never been a better time to be overextended.

We'll see where my next Evil Plan comes from -- Hugh points out that you can't necessarily force that moment and that you'll likely not know that you reached the moment until after you've experienced it and are reflecting back.  That's ok.  I've done all I can do: I've decided to decide that there will be another.

Read the book.  It's worth your time.

PS -- Hugh's graphic at the top immediately made me think of that scene in Kung Fu Panda (yes, I have a 5-year old and it's a funny movie regardless) where his father tells him that the there is no secret ingredient to make the secret ingredient soup -- go see the movie if you have no idea what I'm talking about.  The end point, and the reason that I bring it up, is that Evil Plans is a hell of a cookbook while the rest, of course, is just up to you.  There is no secret ingredient.  Or secret sauce, for that matter.
Posted by Ross at 3:55 PM
Email ThisBlogThis!Share to TwitterShare to FacebookShare to Pinterest

Love this site its amazing.
something i never seen before.