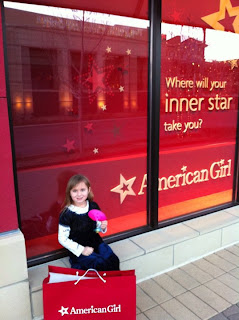 Last year I was a proud father when my daughter took it upon herself to turn her hard-earned savings into the purchase of an American Girl doll for a child at the Children's Hospital in Denver.  I was so impressed by her decision, that I offered to match her donation so that she could get 2 dolls and I felt like I had to tell the story on this blog -- you can read the original post here.  Through the power of social media, traditional media, and the generosity of people around the country, the Tenley Project™ ultimately donated 42 American Girl dolls and several hundred dollars worth of additional toys to the Children's Hospital in Denver on Christmas morning last year.

This year my daughter saved up her allowance again to be able to start the process, and at the time of this writing, we have received enough donations from people around the country to purchase 9 dolls in addition to the one that Tenley funded from her savings.  What's amazing to me is that we really only started publicizing the project around this time last night, so the generosity in the span of 24 hours has been very incredible.

Over the course of telling lots of people about Tenley's story in the past year, we were lucky enough to come across a donor that wishes to remain anonymous, but has offered to match every dollar donated for toys as a direct cash donation to the Children's Hospital in Denver up to $5,000.00.  What this means to everyone generous to give is that every dollar donated means not only a toy for a child that is in the hospital, but a matching cash donation that goes directly to the Hospital itself.

As with last year, if you find yourself particularly inspired to participating in giving something to someone to improve their holiday season, I certainly hope that you do.  If you find yourself inspired to donate to my daughter's project, you can do so on the Tenley Project™ website -- any amount is appreciated and goes to a great cause (and don't forget about the fact that every single dollar is matched).  And even if you are not in a position to donate this holiday season, I would ask that you do me the great favor of posting about the Tenley Project™ on your blog, Tweeting about it, posting about it on Facebook, or using any other means at your disposal to spread the word.

PS -- This is one from me to you: giving resets your brain to realize that there is more than enough.  I have to admit to finding lots of excuses not to give in the past, but believe me, the feeling that you get from giving is incomparable and it is even more incomparable during the holiday season.  Times are tough and I know that not giving is the path of least resistance, but I encourage you to strongly consider giving even if it seems like a small sum that won't make a difference and even if it's tough to do.  This is my no-bullshit advice.  No strings attached and not a pitch to participate in my daughter's project.

Posted by Ross at 8:10 PM
Email ThisBlogThis!Share to TwitterShare to FacebookShare to Pinterest