It's hard to believe that it's year 3 of the Tenley Project™.  What started as a simple lesson in 2010 has turned into nothing short of extraordinary because of the generosity of friends and strangers from around the globe -- you can read the original story of how this all got started here if you're interested.

This year I'm going to start at the end of last year. 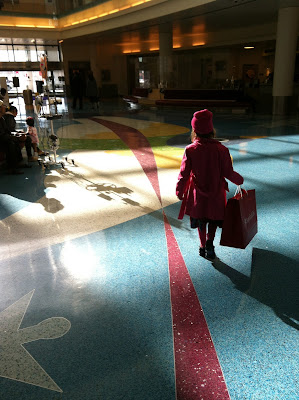 Although pictures are worth a thousand words, I'm going to share with you the story behind this picture.

Thanks to the generosity of all of you, Tenley delivered over 50 American Girl dolls to Children's Hospital on Christmas morning last year.

On her way through the lobby of Children's Hospital while carrying bags of dolls to the volunteer office, Tenley noticed the little girl in this picture sitting with her family on one of the benches, enjoying the sunlight in the atrium.  Tenley asked if she could deliver this little girl a doll and we told her that she absolutely could.

Tenley went back into the volunteer office where all of the dolls where located and searched through the bags of dolls until she located one that she felt was perfect for this little girl.  She grabbed the bag and made her way across the lobby, heading straight for the girl without any hesitation, regardless of the fact that the girl was hooked up to a fairly significant amount of medical equipment that trailed behind her on a rolling rack.

When Tenley went to hand the doll to the girl and asked the parents permission to do so, she discovered that not a single person int he family, including the little girl, spoke English -- no one was able to answer her.  Undeterred, Tenley put down the bag, opened the American Girl box, removed the doll, and handed the doll directly to the little girl, taking care not to disturb any of the lines or tubes that attached her to the equipment.

The girl looked questioningly at Tenley for a moment, not entirely sure what to do with the unexpected gift and Tenley smiled at her and motioned with her hands that the doll was, in fact, a gift.  Disbelievingly, the little girl slowly wrapped her arms around the doll and lit up with a huge smile that was infectious to not only Tenley, but to the rest of the adults around observing, including the parents of the little girl.  Words, as they say, were not required.

This year in 2012, I'm proud to support my daughter's efforts to again bring happiness to children at Children's Hospital in Denver.  In sharing this story over the past year, we find ourselves again lucky enough to have an anonymous donor that is upping the level and will match dollar-for-dollar up to $10,000.00 in donations with the matching donation delivered as a cash donation to Children's Hospital -- for every dollar that is donated to purchase a doll, the hospital gets a dollar in cash.

I was recently involved in a charity event where the founder of the charity explained that in his studies, one of the biggest things that people complained about with charities was the fact that not 100% of the donation goes to the charity itself.  Rest assured that for the Tenley Project™, not only does 100% of the donation amount go to buy dolls, but I personally cover the sales tax and any gaps between the amounts donated and the actual purchase price of the doll; add in the anonymous matching cash donation, and it's safe to say that around 210% of the cash donations go to charity.

As with previous years: if you feel inspired to participate in giving something to someone to make their holiday season more enjoyable, I certainly hope that you do so.  If you find yourself inspired to donate my daughter's project, you can do so on the donation page of the Tenley Project™ website -- any amount is appreciated greatly (and don't forget that every single dollar donated for a doll is matched with a dollar cash donation that goes direct to the hospital).  I know the economy is tough and if you find yourself not in a position to be able to donate to this or any other charity this season, I would ask that you do me the great favor of sharing the Tenley Project™ on Twitter, Facebook, your own blog, or any other means at your disposal to spread the word.

PS -- This is one from me to you: giving really does reset your brain to realize that there is more than enough and that you have more than enough.  I've admitted before and will admit again that I have found tons of reasons in the past not to give, and I know that the economy is still really tough and that the path of least resistance is not to give at all.  Over the last 2 years of working on this project, I have been inspired by those that have given, even those that have only been able to contribute a little, which reinforces the simple fact that it is more important than ever to give when it is hardest to do so.  As always, this is just no-bullshit advice from me.  No strings attached and not any sort of pitch to get you to participate in my daughter's project.
Posted by Ross at 3:14 PM
Email ThisBlogThis!Share to TwitterShare to FacebookShare to Pinterest